Air ducts play a very important role in the air quality of a home, office or commercial space. Read these 4 facts and learn the effects of dirty air ducts on air quality and your health.

Why Clean Your Air Ducts?

If you have an air conditioning system in your home, apartment, or business in or around North Augusta, SC then chances are you’ve noticed some lingering dust around the vents. This dirt comes from a buildup of the natural contaminants flushed through the HVAC system, such as from pets, the outdoors, cooking, and household cleaning. Unless you regularly clean the air filters properly, this dust accumulation can clog the system and grow mold, irritate allergies, and cause serious long-term lung problems. Many people don’t realize the potential health risks and financial burden of not maintaining a quality HVAC system. Stay informed to make the best choices in finding the right services for you!

Here are a few surprising facts you need to know:

Fact 1: Cleaning May Not Be Necessary at All, Depending on the Building

First of all, don’t immediately panic! No two buildings conditions are the same. Even if you have the same model home as a neighbor, the unique environment and occupants affect their air quality. Unless there is visible dust or mold, you probably don’t need to worry about worry about regularly cleaning the air ducts. Usually, you can clean the air ducts by just giving a quick swipe with wet wipes or a vacuum. Though it certainly may not hurt, thoroughly cleaning the inside of the ducts with professional help on a is unnecessary, costly, and can even further spread dust particles. You should simply give a quick inspection of the filters and vents from time to time. It will need more extensive cleaning if:

Everyone wants to save money! As much as half of most American’s electric bill comes from their HVAC system, so it’s in your best interest to properly maintain the appliance. A poorly managed HVAC system wastes power by not working at optimum efficiency. Dirt clogged ducts and filters will restrict airflow and cause the system to use much more energy to output the same volume of air. The US Department of Energy recommends you change air filters at least once a month, especially during heavy winter and summer seasons.

Air ducts may also collect dust from small holes and leaks, which can result in 40% of wasted airflow. You might want to inspect and ensure there are absolutely no leaks. You can attempt to seal it yourself with metal insulation tape, but ducts in the attic, for example, may be difficult to reach. You may need professionals for a more thorough and permanent sealing.

Dust can build up on the inside coils. These copper coils are responsibility for cooling your home by absorbing and condensing warm outside air. Because the coils are usually moist from the evaporation process, dirt can easily stick to them and hinder their functionality. Evaporation coils covered in pollutants will no longer absorb heat, and thus your HVAC system will not produce cool air. Dirt can enter the coils from the outside unit or leaks in the air ducts.

If your HVAC unit is more than 10 years old, you may need to consider replacing it. Older models may not have Energy Star level efficiency and can cost an average $115 more a month, depending on your location.

Properly having clean ducts, filters, and coils can increase the power efficiency of HVAC systems by an average 20%. Save money by investing in clean, efficient air!

Most people find a stuffy room unpleasant and at worse unbearably hot, but there is a much darker side to poor building ventilation: the Legionnaires disease that still infects about 18,000 people a year worldwide.

Scientist first documented the bacteria Legionella pneumophila in the 1976 annual convention of the American Legion, a veterans association. They held the conference in Philadelphia to coincide with the Bicentennial celebrations. A few days after, dozens of people who attended developed a severe kind of pneumonia. In the end, Legionnaire’s disease affected 221 individuals, 34 of whom passed away.

The CDC studied the bacteria and traced the outbreak to contaminated waters of the hotel’s cooling tower. Leaks in the air ducts spread the infected waters and vapors throughout the building.

Legionnaires’ disease is relatively common in the US today with about 25,000 cases of infection and 4,000 deaths a year. About 1 in 10 infected people will die. Nevertheless, the illness is very treatable, and patients react well to antibiotics, like fluoroquinolones and azithromycin. In rare cases, patients may require hospitalization. Best recover comes with you identifying the disease and source. If you suddenly develop a severe cold, high fever, or have trouble breathing and cough up blood, go to a doctor immediately.

Be wary of swimming in untreated waters as you may also contact the bacteria in natural fresh bodies of water.

In addition to Legionnaires disease, poor air filtration can cause Pontiac fever and a host of other conditions called “Sick building syndrome”.

Fact 4: You Can Usually Clean the Air Duct System Yourself

If you have the time and right tools, you might want to do the complete air duct cleaning yourself, rather than paying potentially hundreds of dollars for a service company. Remember that deep cleaning is not needed if your ducts are airtight, the vent is clean, and filter changed monthly. Though if you have special circumstances, like severe allergies or recently had construction, you’ll want to save money as best you can in duct cleaning.

For one method, remove the registry venting you’re working with and cover the others around the house (so dust doesn’t just travel as you clean). You should turn on the HVAC fans on high for several minutes before starting to loosen up particles. Then you can use a vacuum to clear out large dust piles and cobwebs of the interior. Then attach a dryer brush to a drill, and slowly reach down along the duct walls. Use the vacuum to pick up the leftovers dust and debris. For harder to reach places, you can similarly use your vacuum to clean the interior after removing the end caps of rectangular ducts. You’ll probably want a mask to prevent inhaling dust while working. You’ll find a flashlight also helpful! When you have finished, be sure to change the filter since they probably caught most of the loose dust from your cleaning.

There are many other methods for self-cleaning your air ducts if you search through YouTube! If you’re willing to get messy and save some money, definitely explore do-it-yourself options!

Resources to Save Energy at Home 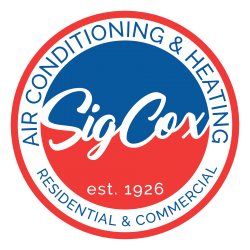 If you’re looking for trusted heating & air conditioning professionals, you can count on Sig Cox.